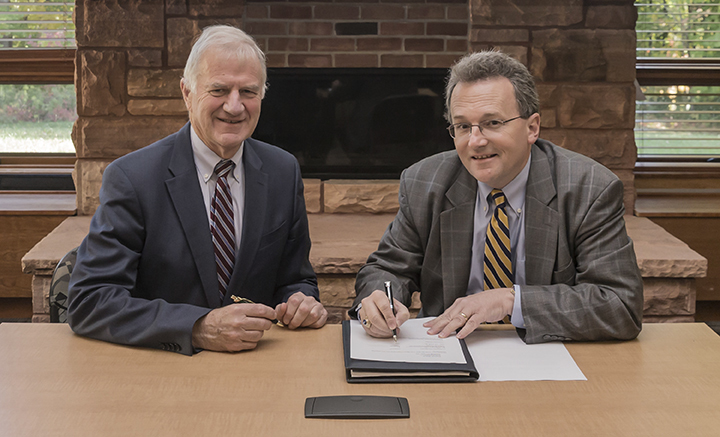 “This week’s signing ceremony and working session with Clarkson University is indicative of the excitement and commitment the men and women of Norsk Titanium feel about moving our operations to the North Country,” said Norsk Titanium President & Chief Executive Officer Warren M. Boley, Jr. “With our first MERKE IV™ production machine arriving here this week, we are building a foundation of futuristic aerospace production that requires the best and brightest engineers, scientists, operators, and staff to be trained and prepared to revolutionize this industry.”

“We are pleased to welcome Norsk Titanium to the North Country and to Clarkson University to initiate this exciting relationship,” said Clarkson University President Tony Collins. “I look forward to aligning Clarkson’s rich engineering and research programs with Norsk’s advanced production technologies to give our students the most state-of-the art education possible.”

On September 26, 2016 Norsk Titanium announced the opening of their 67,500 square foot Plattsburgh Demonstration & Qualification Center (PDQC), and on October 18, 2016 the first of twenty MERKE IV™ RPD™ machines destined for Plattsburgh arrived from Norway and was loaded into the new facility. The PDQC facility is funded by a Norsk Titanium investment designed to accelerate production and the creation of jobs and economic development in the Plattsburgh-North Country region.

Clarkson University educates the leaders of the global economy. One in five alumni already leads as an owner, CEO, VP or equivalent senior executive of a company. With its main campus located in Potsdam, N.Y., and additional graduate program and research facilities in the Capital Region and Beacon, New York, Clarkson is a nationally recognized research university with signature areas of academic excellence and research directed toward the world’s pressing issues. Through more than 50 rigorous programs of study in engineering, business, arts, education, sciences and the health professions, the entire learning-living community spans boundaries across disciplines, nations and cultures to build powers of observation, challenge the status quo, and connect discovery and innovation with enterprise. For more information, visit www.clarkson.edu